The Virginians
There’s a bit of the Old Dominion in us all, staff writer Mike Edwards and photographer David Alan Harvey discover as they visit the people of Virginia.
2, 300- Year- Old Greek Ship Reaches Port at Last { Last Harbor for the Oldest Ship}
Up from the sea floor off Cyprus comes a 2, 300- year- old jigsaw puzzle. Marine archaeologists Susan and Michael Katzev tell how it was pieced together.
Guatemala, Maya and Modern
Louis de la Haba describes the two faces of this Central American land: one Indian and fiercely traditional, the other contemporary and swiftly changing.
The Red Sea’s Sharkproof Fish
An unassuming sole holds its own against the sea’s most efficient predator. Studying its defense mechanism, famed zoologist Eugenie Clark finds that its toxin may lead to development of effective chemical protection against shark attack.
The Renaissance Lives On in Tuscany
Luis Marden, veteran chief of the Geographic’s foreign editorial staff, explores the region that gave birth to Galileo, Dante, Michelangelo, and da Vinci
Isles of the Western Sea: Scotland’s Inner Hebrides { Scotland’s Inner Hebrides: Isles of the Western Sea}
Of Highland blood himself, Kenneth MacLeish seeks out the fragile folkways of these highland islands moored in the North Atlantic.

Be the first to review “National Geographic November 1974” Cancel reply 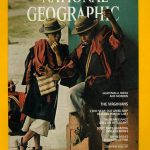