Through Ozark Hills and Hollows
The highlands of Missouri and Arkansas hum with tourists and new industry, but residents cling to old- time traditions.
Behold the Computer Revolution
Staff writer and photographers take a close look at the chips embedded in everyday life and speculate on the effect computers may have in the future.
Seeking the Truth About the Feared Piranha
The Society’s senior natural scientist journeys across South America to study the legendary river fish, allegedly a hundred times more rapacious than any other fish.
The Wasp That Plays Cupid to a Fig
Commercial fig growers in California’s San Joaquin Valley depend on the mating behavior of the fig wasp to fertilize a multimillion- dollar crop.
Computer Helps Scholars Re- create an Egyptian Temple
A team locates thousands of decorated blocks from a destroyed temple at Karnak and uses computers to help create a photographic reconstruction.
Gangtok, Cloud- wreathed Himalayan Capital
Nepalese of the Hindu faith settled in the Kingdom of Sikkim in the 19th century, but the ruling family and culture still follow the rituals of Tibetan Buddhism.

Be the first to review “National Geographic November 1970” Cancel reply 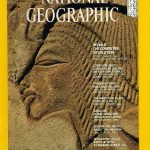