This Is the China I Saw
China, virtually closed to American eyes for over a decade, opens its doors to a Danish author for a lengthy tour conducted by communist officials.
Vinland Ruins Prove Vikings Found the New World
Excavations in Newfoundland uncover a Viking settlement at L’ Anse aux Meadows, and cast a new light on the glorious history of Norse exploration.
Profiles of the Presidents: Part I { The Presidency and How It Grew}
The office of the President combines effective power with enlightened responsibility, and the scope of the office has increased dramatically since its inception. The author presents profiles of the nation’s first five Presidents.
Earliest Geographics to be Reprinted { Reprinting Brings Earliest Geographics to Life}
Reprints of the first 20 years of NATIONAL GEOGRAPHIC magazine are available for purchase. Articles focus on events such as the Boxer Rebellion, the Boer War, and African exploration.
The Moon Close Up
Photographs offer the first close look at the surface of the moon and offer hope for the eventual landing of a manned spacecraft.

Be the first to review “National Geographic November 1964” Cancel reply 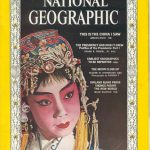