Russia of the Hour: Giant Battle Ground for Theories of Economy, Society, and Politics, as Observed by an Unbiased Correspondent
Within the far- flung boundaries of the Soviet Union communist leaders keep an eye towards industrialization by providing education for the working- class. Yet the country still struggles with widespread poverty and limited resources.
Guatemala: Land of Volcanoes and Progress: Cradle of Ancient Mayan Civilization, Redolent With Its Later Spanish and Indian Ways, Now Reaping Prosperity from Bananas and Coffee
Modern banana plantations and Maya ruins coexist in a country of lush jungles, arid deserts, fertile plateaus, and rugged mountains.

Be the first to review “National Geographic November 1926” Cancel reply 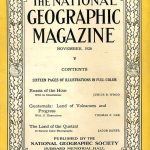