Peary’s Explorations in the Far North
For over 350 years European lives have been lost in attempts to reach the top of the globe. Conquering the Pole has taken the imagination and inventiveness of an American naval engineer – – a member of the Society.
Peary as a Leader: Incidents from the Life of the Discoverer of the North Pole Told by One of His Lieutenants on the Expedition Which Reached the Goal
A member of the 1909 expedition to the North Pole attributes the admiral’s historic achievement to his qualities of character: determination, intelligence, belief in self, and a kind yet commanding presence.
Around the World with the Salvation Army
Comforting the soldier, alleviating suffering and hunger, and proclaiming Christianity, the Salvation Army is an empire more diverse than any under a national flag.
The Crow, Bird Citizens of Every Land: A Feathered Rogue Who Has Many Fascinating Traits and Many Admirable Qualities Despite His Marauding Propensities
Thanks to a combination of resourcefulness, adaptability, and wile, members of the endlessly entertaining Corvus family can be found nearly everywhere on Earth.
The National Geographic Society’s Notable Year
Saddened by the deaths of several distinguished members in the past year, the Society is proud of its achievements in promoting discoveries from the Arctic to the Andes, encouraging conservation, and advancing knowledge of horticulture and zoology.
When the Father of Waters Goes on a Rampage: An Account of the Salvaging of Food- fishes from the Overflowed Lands of the Mississippi River
The U. S. Commissioner of Fisheries reports that efforts to rescue and return the millions of fish stranded each year by the flooding of the Mississippi have finally reached a scope commensurate with the need.

Be the first to review “National Geographic April 1920” Cancel reply 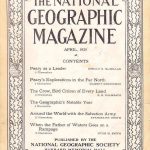