The Whirlpool of the Balkans
Bordering the Adriatic and Black Seas, this curious region where Europe meets the East encompasses a dozen peoples, half a dozen religions, and a score of languages.
The New Map of Europe: Showing the Boundaries Established by the Peace Conference at Paris and by Subsequent Decisions of the Supreme Council of the Allied and Associated Powers
World War I treaties have redrawn boundaries to reflect more accurately the economic interests and historic traditions of new nations like Czechoslovakia and Finland as well as reborn ones like Poland.
The Orkneys and Shetlands- -A Mysterious Group of Islands
These little known islands reveal a Viking heritage and mysterious stone circles and mounds of earlier inhabitants.
Czechoslovakia, Key- Land to Central Europe
This new nation is a pansy- bed of interesting peoples in rainbow costumes, from the streets of Prague in the west to the rural highlands in the east.

Be the first to review “National Geographic February 1921” Cancel reply 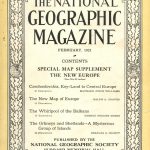