An Important New Guide for Shipping: Navassa Light, on a Barren Island in the West Indies, is the First Signal for the Panama Canal
The Caribbean Sea lacks the kind of safety signals that mark other heavily trafficked sea lanes. The Navassa lighthouse, between Jamaica and Haiti, aids navigators through the hazardous Windward Passage en route to the Panama Canal.
The Spirit of the Geographic
Thanks to the generosity of its members, the National Geographic Society has been able to fund two wards instead of one, twenty beds instead of ten, at the American Military Hospital in Neuilly, France.
The Rebirth of Religion in Russia: The Church Reorganized While Bolshevik Cannon Spread Destruction in the Nation’s Holy of Holies
Thomas Whittemore gives an account of the Russian Orthodox Church’s history, and what its leaders are doing to survive the present onslaught of war and revolution.
Coal- -Ally of American Industry: Following the Nation’s Annual Output of 735, 000, 000 Tons of Fuel from Prehistoric Ages to Its Arrival at Tidewater
William Joseph Showalter delves deep into the anthracite mines of Pennsylvania, where he gains appreciation for the dirty and dangerous work endured by an army of American miners.
The Price of Liberty, Equality, Fraternity
Though official tallies are not in, it is estimated that 1. 8 million Frenchmen have died thus far in the Great World War.
Our Friends, the French: An Appraisal of the Traits and Temperament of the Citizens of Our Sister Republic
There is no contradiction, says the author, between the cultivated sensibilities of the French and their bravery in battle. Many of those sensibilities, from the culinary and the social to the artistic, are examined.

Be the first to review “National Geographic November 1918” Cancel reply 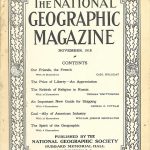