British Isles
A photographic essay depicts the landscape and inhabitants of the British Isles.
Alaska’s New Railway
A force of nearly 1, 500 men worked during the summer of 1915, making dirt fly along the shores of Cook Inlet, as the Alaskan Railroad proceeds on schedule.
Jerusalem’s Locust Plague: Being a Description of the Recent Locust Influx into Palestine, and Comparing Same with Ancient Locust Invasions as Narrated in the Old World’s History Book, the Bible
John D. Whiting compares the recent invasion of locusts in Palestine and Syria with the ancient locust plagues described in the Bible.
The Nation’s Pride
Celebrating American ingenuity and resourcefulness, Franklin K. Lane, Secretary of the Interior, surveys development of the country’s natural resources.

Be the first to review “National Geographic December 1915” Cancel reply 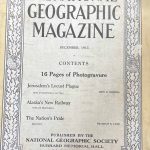