Impressions of Palestine
Former British Ambassador to the U. S. , James Bryce, relates his impressions of a predominantly Muslim Palestine.
Washington: Its Beginning, Its Growth, and Its Future
Former President William Howard Taft writes an accompanying article to 32 pages of color illustrations tracing the architectural development of the city back to the visions of George Washington, Thomas Jefferson, and French city planner, Pierre- Charles;
Report of the Director and Editor of the National Geographic Society for the Year 1914
The year 1914 was the most successful in the history of the Society, and saw increased spending on the magazine as well as stronger efforts in the fields of research and exploration.

Be the first to review “National Geographic March 1915” Cancel reply 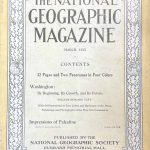