Past Becomes Future for Mongolian Nomads
With the collapse of communism and central planning, nomadic herders return to their old ways. Leaving cradle- to- grave welfare behind, they ride unfamiliar terrain in a market economy.
Europe Faces an Immigrant Tide
Fleeing poverty or persecution, millions of immigrants from Africa, the Middle East, and Eastern Europe seek refuge in the West. But resentment and even violence make for an often bitter welcome.
U. S. Beekeepers: Hives for Hire { America’s Beekeepers: Hives for Hire}
Load the bees and hit the road. Key players in U. S. agriculture, migratory beekeepers roll with the seasons, renting out beehives to pollinate crops and reaping their own rich harvests of honey.
Middle East Water- -Critical Resource { Water- -The Middle East’s Critical Resource}
Will water someday trigger war in the Middle East? The possibility exists, unless nations in the region set aside ancient animosities and cooperate to make use of adequate but dwindling supplies.
Central Park: Oasis in the City
The great green retreat in the heart of Manhattan offers pastoral landscapes that draw 15 million visitors each year. Since 1858, Central Park has been a model for bringing parks to city people.

Be the first to review “National Geographic May 1993” Cancel reply 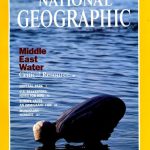