Ukraine
Fifty million Ukrainians struggle to maintain their language, their religious faith, and their sense of identity in a Soviet republic larger than France. But they tread a fine line, senior writer Mike Edwards and photographer Steve Raymer report.
Chernobyl- -One Year After
Mike Edwards and Steve Raymer visit the region of the world’s worst nuclear- power accident to learn what really happened and what the long- range consequences may be.
At Home With the Arctic Wolf
In Canada’s far north, wildlife biologist L. David Mech and photographer Jim Brandenburg win the trust of a wolf pack and record the behavior of the elusive animals at remarkably close range.
New Zealand: the Last Utopia?
In this scenic isolated nation, where sheep outnumber citizens, New Zealanders are grappling with world problems in a thoroughly modern way, according the Robert P. Jordan. Photographs by Kevin Fleming.
The Captivating Kiwifruit
What’s homely on the outside, jewel- like on the inside, and can be served sliced or poured? Noel D. Vietmeyer and photographer Jim Brandenburg describe New Zealand’s hairy berry that has taken the world by storm.

Be the first to review “National Geographic May 1987” Cancel reply 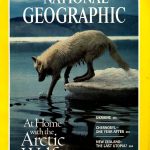