Visit to Forbidden Tibet { In Long- Forbidden Tibet}
Few outsiders – – and only a handful of Western journalists – – have visited that remote, little- known land locked behind the high Himalayas. Fred Ward describes and photographs a people and a way of life slowly emerging from the past.
The White Mountain Apache { Seeking the Best of Two Worlds}
A white man who married into a White Mountain Apache family, tells of the tribe’s achievements and frustrations on their modern- day reservation in Arizona.
The White Mountain Apache { A Maiden Comes of Age; Coming of Age the Apache Way}
A White Mountain Apache woman describes her Sunrise Dance, the tribe’s traditional celebration marking the passage from girlhood to womanhood.
The White Mountain Apache { Their Past and Future; At Peace With the Past, In Step With the Future}
An Indian struggle to retain traditional ways in today’s world is recounted by tribal leader Ronnie Lupe; by a young woman coming of age, Nita Quintero; and by a white reporter- photographer who married into the tribe, Bill Hess.
The Pesticide Dilemma
America’s bounty from farm and forest rests on careful use of a billion pounds a year of insect and weed killers. How great are the risks of poisoning ourselves and our environment? Allen A. Boraiko and photographer Fred Ward document a crucial and gro;
Tunisia: Sea, Sand, Success
A North African Arab republic without much oil relies on education and human energy in the uphill battle faced by all developing nations. By Mike Edwards and David Alan Harvey, with a double supplement map of Africa.

Be the first to review “National Geographic February 1980” Cancel reply 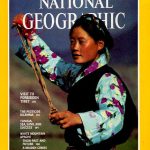