Birds That Walk on Water { Western Grebes: The Birds That Walk on Water}
Western grebes perform elaborate courtship rituals and communicate in ways just now being understood. Dr. Gary L. Nuechterlein tells of his seven- year study of these intriguing marsh dwellers.
The Temples of Angkor { Will They Survive? }
A GEOGRAPHIC team visits Kampuchea’s fabulous ruins, rarely seen by Westerners in years. Wilbur E. Garrett introduces a closeup look at Angkor’s. ..
The Temples of Angkor { Ancient Glory in Stone}
War and neglect have again swept across some of humanity’s most magnificent expressions of faith, yet the temples of the Khmer endure, reports Peter T. White. Photographs by Wilbur E. Garrett.
Perth- -Fair Winds and Full Sails
Isolated from the rest of the continent, the capital of Western Australia has burgeoned and prospered through a can- do spirit of independence. By Thomas J. Abercrombie, with photographs by Cary Wolinsky.
Kampuchea Wakens From a Nightmare
The nation once known as Cambodia reels from war and genocide that claimed perhaps a third of the population. Peter T. White finds a country, occupied now by Vietnamese troops, striving to regain a semblance of normalcy. With photographs by David Alan; H
The Incredible Potato
Throughout history the noble but humble spud has often been misunderstood, occasionally maligned. Robert E. Rhoades comes to the defense of this versatile vegetable. Photographs by Martin Rogers.

Be the first to review “National Geographic May 1982” Cancel reply 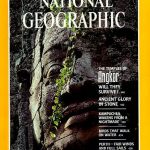