Four Years of Diving to the Bottom of the Sea: Globe- eyed Sharks, Fish with Stilts, Undersea Deserts, Avalanches, Powerful Currents- -the French Bathyscaphe’s Record- holding Pioneer Pilot Tells of 59 Trips to the Black Abyss
A deep water pioneer pilots an underwater exploration vessel on 59 trips to the ocean floor.
Heritage of Beauty and History: Want a Live Volcano? Dinosaur Bones? Buffaloes? Sequoia Forest? Americans Own These and Much More- -in the National Parks
The National Park Service director surveys the natural retreats offered by the nation’s parks, from canyons to volcanoes.
Sand in My Eyes: The Unusual Story of an Adventurous Couple Who Crossed the Strife- torn Algerian Sahara by Car
A four- wheel- drive vehicle is as essential as water for writers following a dirt track across the Sahara, where paved roads remain a novelty.
Hatchetfish, Torchbearers of the Deep
Found in large schools in the Strait of Messina, these miniature sea monsters light their murky world with mysteriously glowing undersides.
Mysore Celebrates the Death of a Demon
In southern India, painted elephants and prancing horses parade in the nation’s lavish observation of the Dasara holiday, a ten- day festival.

Be the first to review “National Geographic May 1958” Cancel reply 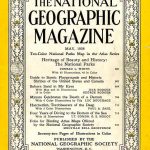