The Nation’s Library
The Library of Congress in Washington, D. C. is not a circulating library but a vast reference collection, with information available to anyone who asks.
Praying Mantis
The praying mantis is harmless to humans but a dangerous predator to garden pests, as this photo essay illustrates.
Mr. Jefferson’s Charlottesville
The influence of Thomas Jefferson is evident throughout Charlottesville, most notably in the buildings and grounds he designed at the University of Virginia, and his home at Monticello.
Japan Tries Freedom’s Road
Now that World War II is over, the American military presence in Japan is introducing Western culture to this tiny island nation.
Search for the Scarlet Ibis in Venezuela
The mission of the 1949 National Geographic expedition to Venezuela was to make scientific observations and color photographs of the elusive scarlet ibis.

Be the first to review “National Geographic May 1950” Cancel reply 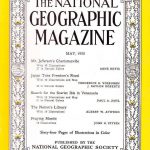