Winged Denizens of Woodland, Stream, and Marsh
Chirping chickadees often indicate a mixed band of forest birds, including nuthatch, wren, and titmouse species.
Youth Explores Its World
The Boy Scout movement reaches global proportions, involving more than two million boys in learning many practical things, not taught in schools, such as first aid, mapmaking, and nature study.
Land of the Free in Asia: Siam Has Blended New With Old in Her Progressive March to Modern Statehood in the Family of Nations
Siam ( Thailand) , an independent spirit in Southeast Asia, surges ahead with innovations in commerce and transportation yet weaves its rich traditions into the patterns of the present.
The Society Takes Part in Three Geographic Expeditions
Denizens of the deep sea, volcanic craters of Alaska, and glaciers of the South Pole capture the interest of the Society’s Board of Trustees.
Peaks and Trails in the Canadian Alps
Photographer Byron Harmon transports us to a winter wonderland of hikers and skiers, mushers, moose, and mountain goats.
The Okefinokee Wilderness: Exploring the Mystery Land of the Suwannee River Reveals Natural Wonders and Fascinating Folklore
Southeastern Georgia’s swampy corner hops, slithers, and flutters with wildlife and echoes with the grand opera of the Okefinokee, better known as hollerin’ .

Be the first to review “National Geographic May 1934” Cancel reply 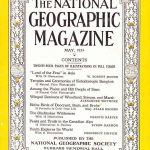