Wellspring of the High Plains { Ogallala Aquifer: Wellspring of the High Plains}
The Ogallala aquifer, a remarkable subterranean water source, was once thought inexhaustible. Now it suffers from overuse, challenging the inventiveness of those who depend on it.
Easter Island Unveiled
Haunting stone statues scattered over this remote Pacific island are mute testimony to a 1, 500- year- old culture that has been transformed by contact with the outside world.
A Broken Empire { Ukraine: Running on Empty}
Fiercely nationalist, Ukraine warily eyes its worrisome neighbor, Russia, even as the two share remnants of Soviet military might.
A Broken Empire { Kazakhstan: Facing the Nightmare}
Emerging from Russian domination, Kazakhstan bears a horrible legacy: the consequences of Soviet nuclear testing.
A Broken Empire { Russia: Playing by New Rules}
Inflation, pollution, shortages – – and unprecedented opportunities – – mark the chaos that has followed the Soviet collapse.
Reclaiming a Lost Antarctic Base
An eight- man expedition restores the first permanent U. S. station in Antarctica. East Base, neglected since 1948, now stands as an international historic monument.

Be the first to review “National Geographic March 1993” Cancel reply 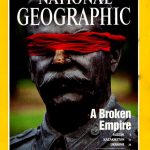