Chan Chan, Peru’s Ancient City of Kings
The largest city in pre- Columbian South America, now a mud- brick ruin, once guarded royal treasures and stood up to the Inca.
Yesterday’s Congo, Today’s Zaire
Chaos and slaughter followed independence from Belgium in 1960 – – now Zaire’s 200 tribes turn to nation building.
Oil and Penguins Don’t Mix
On breeding grounds off South Africa’s tip penguins fall victim to egg- robbing seabirds and humans, and now to oil pollution from tankers rerouted by the closing of the Suez Canal in 1967.
Ocean Mammals. .. ( Eskimos’ Fight for Whaling Rights) { Ocean Mammals Are to Us What the Buffalo Was to the Plains Indian. }
Before a 1972 U. S. Senate committee hearing on the Marine Mammal Protection Act, Eskimos pleaded for their traditional right to hunt the bowhead whale. The Senate agreed.
Close- up: U. S. A. — A Fresh Look at Our Land and Its Heritage
This announcement introduces a series of regional maps to be issued with the magazine as aids to the traveler.
Cyprus Under Four Flags: A Struggle for Unity
Since independence of the former British colony, the Christian Greek majority and the Muslim Turkish minority have waged war; they remain separated in armed camps.
The Last U. S. Whale Hunters
Eskimos in skin boats take bowhead whales and divide the meat among every family in Barrow, Alaska.
High- stepping Idaho
Once remote and sparsely populated, the western state draws new settlers with its clean air and water and now must guard against people pollution.

Be the first to review “National Geographic March 1973” Cancel reply 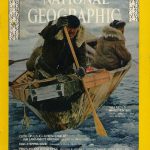