Imperial Rome Reborn
Rome’s modern Caesar since he came to power in 1922, Benito Mussolini, or Il Duce, is Italy’s dictator and leader of the fascist empire.
The Mexican Indian Flying Pole Dance
In the mountains of Mexico, the Otomi Indians still practice a ceremony involving dancers who scale a 70- foot- tall pole, then fly around the pole, attached to ropes.
Time’s Footprints in Tunisian Sands
An African suburb of Europe, Tunisia, lying between the Sahara and the Mediterranean Sea, is a country of ancient whitewashed cities as well as fertile vineyards and olive groves.
Crater Lake and Yosemite Through the Ages
The pristine blue water of Oregon’s Crater Lake fills a depression left when an ancient volcano erupted and lost its top half. California’s striking Yosemite Valley was carved ten million years ago by glaciers and streams.

Be the first to review “National Geographic March 1937” Cancel reply 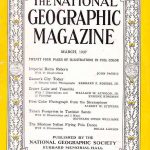