Morocco Beyond the Grand Atlas { Beyond the Grand Atlas: Where the French Tricolor Flies Beside the Flag of the Sultan of Morocco}
An Eastern land in the marrow of her bones, Morocco seasons its oriental base with a North African location and centuries of European influence, creating a culture with room for both urban businesses and nomadic chieftains.
Adventurous Voyages to Medieval Towns { Entering the Front Doors of Medieval Towns: The Adventures of an American Woman and Her Daughter in a Folding Boat on Eight Rivers of Germany and Austria}
Cornelia Stratton Parker and her daughter, June, paddle their faltboote, a collapsible, kayak- style craft, along German rivers, some wilder than others.
First Over the Roof of the World by Motor: The Trans- Asiatic Expedition Sets New Records for Wheeled Transport in Scaling Passes of the Himalayas
Maynard Owen Williams sends his latest adventure- filled installment from the Citroen- Haardt expedition across Asia, in which the Golden Scarab and Silver Crescent cars climb snow- clogged trails through the mountains and reach the Sinkiang region of C;

Be the first to review “National Geographic March 1932” Cancel reply 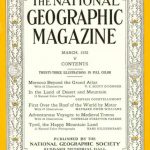