Crusader Castles of the Near East
To ensure control of the Holy Land, European knights re- created the military strongholds of their feudal homelands in castles along the Mediterranean coast and inland.
Tropical Toy Fishes: More Than 600 Varieties of Aquarium Pygmies Afford a Fascinating Field of Zoo?logical Study in the Home
American fish fans looking to expand their horizons beyond the goldfish bowl discover the exotic beauty of such aquarium- compatible species as the moonfish, fighting fish, and armored catfish.
On the World’s Highest Plateaus: Through an Asiatic No Man’s Land to the Desert of Ancient Cathay
Seeking signs of ancient civilizations and evidence of the last ice age, a team of scientists travels by caravan between the borders of Russia, China, and India.
Visits to the Old Inns of England: Historic Homes of Hospitality for the Wayfarer Dot the Length and Breadth of the Kingdom
A stop at the White Swan, Red Horse, or any such British inn rewards travelers with an atmosphere of courtesy, history, and traditional charm.

Be the first to review “National Geographic March 1931” Cancel reply 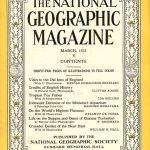