Working Teak in the Burma Forests: The Sagacious Elephant Is Man’s Ablest Ally in the Logging Industry of the Far East
A British army officer looking for a change takes a jungle job with a
The Conquest of Antarctica by Air
An intrepid scientific team crosses the South Pole by air and maps 160, 000 square miles of Antarctic territory in their pioneering study of the region.
Admiral Byrd Receives New Honor From The Society
Honored for his 14- month expedition in Antarctica, Admiral Byrd receives National Geographic Society’s Special Gold Medal from President Hoover with ambassadors, military officials, and other dignitaries in attendance.

Be the first to review “National Geographic August 1930” Cancel reply 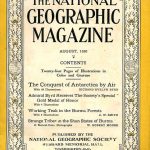