The Depths of the Sea: Strange Life Forms a Mile Below the Surface
Deep in the ocean’s abyss dwell bizarre yet beautiful creatures, such as glassy giant shrimp, flying snails, and eerie dragonfish.
Byroads and Backwoods of Manchuria: Where Violent Contrasts of Modernism and Unaltered Ancient Tradition Clash
Dividing time among several tribes in rural Manchuria, the author studies both the historical background and the ongoing modernization of the region by Eastern and Western powers.
The Land of William the Conqueror: Where Northmen Came to Build Castles and Cathedrals
Settled by Scandinavians, the Normandy region of France boasts a rich history, and was home to Joan of Arc and the explorer La Salle as well as William I.
The Travels of George Washington: Dramatic Episodes in His Career as the First Geographer of the United States
Sprinkled with excerpts from his diaries, an overview of Washington’s years as a surveyor suggests the title First Geographer in recognition of his extensive travel through colonial America.

Be the first to review “National Geographic January 1932” Cancel reply 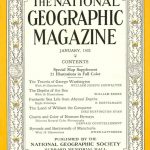