The Lure of the Land of Ice
Sixteen photos of stunning artistry by Herbert G. Ponting, official photographer of the British Antarctic Expedition.
Australia’s Wild Wonderland
The extensive coral reefs in the Indian Ocean off northwest Australia are home to huge sea cows, giant turtles, 12- foot sea snakes, 600- pound stingrays and millions of dollars’ worth of pearls.
Geography and Some Explorers
The glories and romance of the science of geography – – and the geographers who study it.
Beyond the Clay Hills: An Account of the National Geographic Society’s Reconnaissance of a Previously Unexplored Section in Utah
The leader of the National Geographic Society’s Pueblo Bonito expeditions heads beyond the Rainbow Natural Bridge in southern Utah to the breathtaking mesas and canyons that line the San Juan and Colorado Rivers.
Among the Craters of the Moon : An Account of the First Expeditions Through the Remarkable Volcanic Lava Beds of Southern Idaho
Second in extent only to those along the Columbia River are the lava fields of the Snake River plains. They contain some 63 extinct or dormant craters, cones, and fumaroles as high as 600 feet and as long as 30 miles.

Be the first to review “National Geographic March 1924” Cancel reply 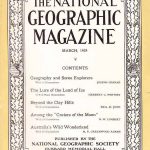