The National Geographic Society Completes Its Gifts of Big Trees
To save the sequoia from destruction by commercial interests, the Society recently helped the government buy an additional 609 acres from private hands, nearly doubling the area preserved in 1916.
Scenes from France
Photographs highlight Brittany and Normandy in the northwest and Provence in the southeast, along with aerial views of Paris, the City of Lights.
Adventures with a Camera in Many Lands
The photographic record of a year observing the peoples of Europe, the Middle East, Egypt, China, central and Southeast Asia, and Japan helps promote understanding of other lands.
The Geography of Japan: With Special Reference to Its Influence on the Character of the Japanese People
The volcanic islands of the Japanese archipelago form a backdrop of savage grandeur for a people who still live by ancient arts.
Life on the Grand Banks: An Account of the Sailor- Fishermen Who Harvest the Shoal Waters of North America’s Eastern Coasts
In the search for Atlantic halibut and cod, the hard- muscled fishermen of Newfoundland, Nova Scotia, and New England hold out against the shift from wooden schooner to steel and steam.

Be the first to review “National Geographic July 1921” Cancel reply 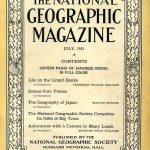