Water and the West: The Colorado River { The Colorado: A River Drained Dry; Age- old Challenge: Water and the West }
Increasing demand and persistent drought have drawn the reservoirs of the Colorado River system, a critical water source for seven states and part of Mexico.
Secrets of Animal Navigation
How does a bird migrate to a destination it has never seen, a salmon return to the stream where it was spawned? Scientists search for the internal compass and map that guide such long- distance journeys.
The Wonderland of Lewis Carroll
Behind the celebrated pen name was the shy Oxford mathematician Charles Lutwidge Dodgson, who stepped through the looking- glass with his character Alice to create classic stories for children.
East Europe’s Dark Dawn: The Iron Curtain Rises to Reveal a Land Tarnished by Pollution
Nations freed from decades of communist rule and unrestricted industrialization confront a harrowing legacy: air, water, and land deadened by pollution.
Bats- -The Cactus Connection
To the Sonoran Desert’s lesser long- nosed bats, cactus flowers and fruits are irresistible. To the cactus, the bats are irreplaceable – – as pollinators and seed dispersers.

Be the first to review “National Geographic June 1991” Cancel reply 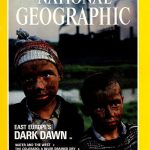