America’s Meat on the Hoof : Because Housewives Want Smaller Beef Roasts, Bigger and Leaner Pork Chops, Scientific Breeders Remodel the Steer and Hog
Changing demands in the consumer marketplace for smaller beef roasts and larger pork chops, leads U. S. beef and pork producers to try new methods of raising cattle and hogs.
Your National Gallery of Art After 10 Years
Donations from Andrew Mellon, Samuel Kress, and many other patrons has allowed the National Gallery of Art to expand its collection of paintings for the enjoyment and education of the American public.
The Spotlight Swings to Suez
Tensions build along the Suez Canal, as the U. S. , France, and Britain negotiate to keep this vital waterway open. Since October 1951, when Egypt demanded that Britain withdraw troops guarding the canal, sporadic fighting has broken out.
Our Home- town Planet, Earth: Examining the Iron- hearted Globe, Science Gains New Knowledge of Earthquakes, Volcanoes, and Earth’s Birth and Future
Studying the Earth from above and below has yielded much new information about its origins. This data will help scientists discover new sources of oil, metals, and radioactive materials.
Solving the Riddle of Chubb Crater
The origin of Chubb Crater in northern Quebec, was a long- standing mystery: Was the crater an extinct volcano, a giant prehistoric sinkhole, or the remains of a meteorite impact? A survey team did not find evidence to support these theories until the ve
Jesse Richardson Hildebrand
A memorial essay on the death of Jesse Richardson Hildebrand, an assistant editor of the magazine since 1930, and a life trustee of the Society since 1946.

Be the first to review “National Geographic January 1952” Cancel reply 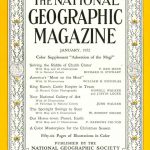