Touring for Birds with Microphone and Color Cameras
A group of ornithologists traveled to Texas, Arizona, California, and other states, observing 681 different types of birds in one year, including the coppery- tailed trogon, prairie chicken, grackle, and heron.
Exploring a Grass Wonderland of Wild West China
China’s grasslands stretch west of Kangting, in China’s Sikang Province, which until recently was a nearly inaccessible region.
Wales in Wartime
Since Roman times, mountainous Wales has been a haven for Britons fleeing war and continues to welcome both refugees and visitors.
Idaho Made the Desert Bloom
With 20 national forests and over three million acres of primitive areas, Idaho yields lumber, lead, zinc, gold ore, tungsten, and potatoes.
Manipur- -Where Japan Struck at India
These photographs show some of the half million people of the Indian state of Manipur, which Japan attacked in May, 1942.

Be the first to review “National Geographic June 1944” Cancel reply 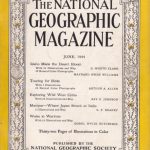