Ancient Temples and Modern Guns in Thailand
In these photographs, Thailand’s stone Buddhas, temples, and palaces stand proudly amid the crowds of Bangkok.
Canada’s War Effort: A Canadian Pictures the Swift and Sweeping Transformation from a Peaceful Dominium to a Nation Geared for War
Once clear, Canadian skies are dotted with fighter planes, indicating Canada’s conversion to a country at war.
Panama, Bridge of the World
Though the Panama Canal Zone, which is vital to the defense of the United States, hums with activity, the majority of Panama is a quiet, Spanish- speaking country of banana and coconut trees, volcanoes, and fishermen.
Black Acres of New York { Black Acres: A Thrilling Sketch in the Vast Volume of Who’s Who Among the Peoples That Make America}
Just 50 miles from New York City, Polish farmers grow onions and other crops in Orange County’s belt of black, fertile earth.
Life Grows Grim in Singapore
Transformed by war, the cosmopolitan city of Singapore is now visited more often by battleships than cruise ships, as the United States tries to fortify the city that is its major supplier of rubber and tin.

Be the first to review “National Geographic November 1941” Cancel reply 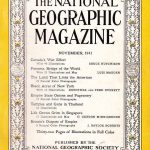