Florida Cannon Solve Mystery of Sunken Ship { Cannon on Florida Reefs Solve Mystery of Sunken Ship}
In the Florida Keys, divers first discover a coral- covered cannon and later find other artifacts, piecing together the story of the H. M. S. Winchester, a British ship that sank 200 years ago.
Dogs of Duty and Devotion
From guide dogs to sled dogs, canines assist people throughout the world, from New York to Antarctica.
Working Dogs of the World
From German shepherds to St. Bernards, these 23 canine breeds vary widely, yet all are intelligent and loyal.
From Sea to Clouds in Ecuador
The South American country of Ecuador boasts mountains of over 20, 000 feet, dense jungles, rivers bustling with trade boats, and a historic capital, Quito, with 56 churches.
Islands Adrift: St. Pierre and Miquelon: In a Key Position on the North Atlantic Air Route, France’s Oldest Colony Rides Out Another Storm
Off the coast of Newfoundland, on a group of islands that are France’s oldest and smallest colony, the people who live on the 90 square miles of St. Pierre and Miquelon, brace themselves for the impact of the war in Europe.
U. S. Roads in War and Peace
Edging toward the Second World War, the United States uses its network of highways to transport soldiers and military supplies, and plans to create new byways and improve existing roads, tunnels, and bridges.

Be the first to review “National Geographic December 1941” Cancel reply 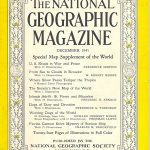