1 review for National Geographic May 1940 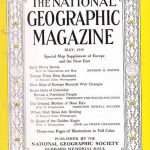