The Bowdoin in North Greenland: Arctic Explorers Place Tablet to Commemorate Sacrifices of the Lady Franklin Bay Expedition
Despite spending the winter on a ship hemmed in by ice, the MacMillan Arctic Expedition succeeds in exploring parts of northern Greenland by dogsled. The crew honors previous polar explorers and perpetuates the tradition of courage and scientific coopera
To Seek the Unknown in the Arctic: United States Navy Flyers to Aid MacMillan Expedition Under the Auspices of the National Geographic Society in Exploring Vast Area
With a $ 40, 000 grant from the Society, a research team plans an expedition to the areas between Alaska and the North Pole.
A Caravan Journey Through Abyssinia: From Addis Ababa Through Lalibela, the Strange Jerusalem of Ethiopia, in Search of New Grains for American Farms
Due to the good will of a ruler in central Africa, the author travels through Abyssinia, camping and visiting local leaders while reporting on agriculture.
Black- Headed Gulls in London- -Aces of Aviation { Aces of Aviation; Black- Headed Gulls in London}
Wintering in London, black- headed gulls enjoy handouts from residents and show off for A. H. Hall as he captures their movements on film.

Be the first to review “National Geographic June 1925” Cancel reply 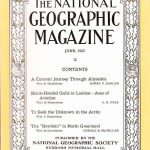