The Millennial City: The Romance of Geneva, Capital of the League of Nations
Astride the Rhone and below the gaze of Mount Blanc, this historic Swiss city is poised to become the center of man’s moral universe.
Who Shall Inherit Long Life? On the Existence of a Natural Process at Work Among Human Beings Tending to Improve the Vigor and Vitality of Succeeding Generations
Inventor Alexander Graham Bell marshals statistical evidence that longevity is an inherited trait and that people who have the most children live longest.
The Azores: Picturesque and Historic Half- way House of American Transatlantic Aviators
These verdant Portuguese islands in the Atlantic play an important role for navigators and pilots, and were a vital stopover on man’s first transatlantic flights.
Devil- Fishing in the Gulf Stream
The waters between the Bahamas and Florida’s Atlantic coast make for a sport fisherman’s paradise of tarpon, bonefish, sailfish, and the monstrous devil- ray.
Sight- Seeing in School: Taking Twenty Million Children on a Picture Tour of the World
With the National Geographic Society leading the way, the photographic revolution is helping to spark among the world’s schoolchildren an interest in geography, culture, and world unity.
A Map of the New Germany
In the wake of World War I, the map of Europe is redrawn at Versailles.

Be the first to review “National Geographic June 1919” Cancel reply 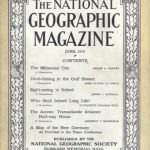