The Citizen Army of Switzerland
Switzerland remains an island of peace in a sea of war, thanks to a citizen army maintained by compulsory military service.
The Beauties of France
An 84- page survey of the loveliest land in all Europe reveals the many faces of France, from the canals of Toulouse to industrial Lyon and the windswept peninsula of Brittany.
The World’s Debt to France
Beginning with the French Revolution of 1789, Western history’s debt to the French experience – – cultural and scientific, as well as political – – is reviewed.

Be the first to review “National Geographic November 1915” Cancel reply 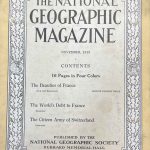