Mars on Earth
In the battered landscape of an impact crater, scientists in the Canadian Arctic find ideal ground for testing methods to explore the red planet.
Grand Staircase- Escalante { Celebrating Canyon Country: Grand Staircase- Escalante National Monument}
The creation of Grand Staircase- Escalante National Monument in southern Utah adds nearly two million acres of unsullied wilderness to the United States’ cache of protected land.
Iran: Testing the Waters of Reform
After two decades under the ayatollahs, many Iranians yearn for greater freedom and less state control. Their champion, President Mohammad Khatami, nudges the country toward more openness but faces a deepening power struggle.
Humpback Whales { Listening to Humpbacks}
In every ocean on Earth humpbacks sing, socialize, and make journeys as long as the sea is wide. Scientists record the songs, chart the travels, and observe the family life of these endangered giants, whose numbers now seem to be increasing.
The Quest for Color
Battles raged over it, fortunes flowed from it, and songs and legends sprang from it. Today humans still scour the Earth – – and the laboratory – – for dyes and pigments to interpret and enhance their world.
Hornbills { The Shrinking World of Hornbills}
From Africa to Melanesia, hunting and habitat loss threaten the survival of regal birds that nest in a way that is all their own.

Be the first to review “National Geographic July 1999” Cancel reply 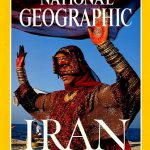