The Grand Managed Canyon
Glen Canyon Dam has long harnessed the mighty Colorado, but environmentalists, biologists, and river runners still contest the benefits.
The Dawn of Humans: The First Europeans
Pushing Europe’s prehistory back to a million years ago, scientists are finding startlingly early human remains. Our ancestors? Or their mysterious precursors?
Robot Revolution
Smaller and smarter than ever, robotic machines have moved beyond the factory floor to transform human work, entertainment, and exploration.
Montserrat Volcano { Montserrat: Under the Volcano}
For two years residents of this tiny Caribbean island have lived with a smoldering, belching menace.
Sumo
Cloaked in ritual, explosive bouts between titanic wrestlers reveal much about Japanese history and culture.
The Roman Empire: Part One, The Making of an Empire { The Power and the Glory of the Roman Empire}
Ruthless in conquest but tolerant in victory, the ancient Romans forged a vast empire that lasted more than a thousand years. In the first of two articles we trace its rise and fall.

Be the first to review “National Geographic July 1997” Cancel reply 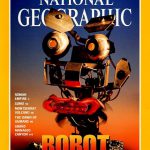