Boston- -Breaking New Ground
From its massive harbor tunnel project to its first Italian mayor, this historic city is reshaping itself. A double map supplement highlights the Boston to Washington, D. C. , megalopolis.
Northern Goshawks { Alone With the Northern Goshawk}
Fierce raptors, dutiful parents, squabbling chicks – – intimate scenes of the hawks’ life are observed from a tree blind, as their nesting grounds in the West fall prey to logging.
Recycling
Not since World War II have Americans been so aware of wasting things. Cans and bottles, paint, tires, and motor oil, it makes economic and environmental sense to use them again.
The Tale of the [ San Diego] { [San Diego: ] An Account of Adventure, Deceit, and Intrigue}
In 1600 the Spanish galleon San Diego sank while battling a Dutch ship 20 miles off Manila Bay. This archaeological time capsule of Spanish life in Asia has revealed some unexpected finds.
Viruses: On the Edge of Life, On the Edge of Death
Microscopic bundles of genes, viruses stunt tomatoes, drive dogs mad with rabies, and cause human woes from common colds to killer flus to AIDS. Scientists race to identify the newest threats.

Be the first to review “National Geographic July 1994” Cancel reply 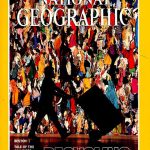