The Nation’s 200th Birthday
An introduction by NATIONAL GEOGRAPHIC’s Editor announces a series of articles planned to celebrate the U. S. Bicentennial.
Exploring England’s Canals
Converted coal carriers transport pleasure boaters along old canals and navigable rivers of the island’s heartland.
At Home With the Bulldog Ant
A colony of ferocious ants lives and is observed in a laboratory in Canberra, Australia.
A Sacred Symbol Comes Home: Afo- A- Kom { The Soul of a Tribe Returns to Africa; Afo- A- Kom: A Sacred Symbol Comes Home}
A revered statue stolen from the Kom people in Cameroon, turns up in a New York City gallery and is returned to its rightful owners.
Small Service With a Big Mission: The Coast Guard { The Coast Guard: Small Service With a Big Mission}
With only 38, 000 men and women, the smallest of the nation’s military services breaks ice on the Great Lakes, tends buoys and lighthouses, provides disaster relief, and enforces marine treaties.
Vermont- -a State of Mind and Mountains
Strong opinions and hand labor characterize Vermonters, who must face the fact that outsiders own half the state.
Firebrands of the Revolution
A Princeton University professor visits the haunts of Samuel Adams, Patrick Henry, and Thomas Paine to explain their insurgent roles in the fight for U. S. liberty.
Face- to- Face With a World of Ants
A scanning electron microscope picks up surprising detail in these portraits of ants from a Canberra, Australia, collection.

Be the first to review “National Geographic July 1974” Cancel reply 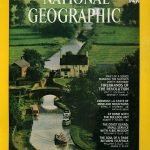