Bangkok, City of Angels
The capital of Thailand, the oldest independent nation in Southeast Asia, finds growth overtaking its graceful canals and Buddhist temples.
Homeward With Ulysses
Sailing his yawl White Mist, National Geographic’s Editor finds that history lives as he explores the Ionian Islands of western Greece.
Nature’s Living, Jumping Jewels
The spectacular Costa Rican tree frogs that inspired pre- Columbian gold images are prevalent today.
An Icelandic Village Fights for Its Life { In Iceland’s Fourteenth Volcanic Eruption of This Century, a Mountain is Born, and A Village Fights for Its Life}
Some 5, 000 Icelanders flee the village of Vestmannaeyjar as a volcano erupts, threatening their community and adding more than a half square mile to the island of Heimaey.
Cuba’s Exiles Bring New Life to Miami
About half the 600, 000 Cubans fleeing the Castro regime since 1959 have settled in and around Miami, adding Latin flavor to the Florida city.

Be the first to review “National Geographic July 1973” Cancel reply 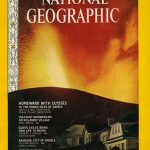