The Society Honors Byrd Antarctic Expedition { National Geographic Society Honors Byrd Antarctic Expedition}
Rear Adm. Richard E. Byrd is honored upon his return from a second Antarctic expedition that brought final proof that the south polar lands form a continent.
Living on a Volcano: An Unspoiled Patch of Polynesia Is Niuafoo?, Nicknamed Tin Can Island by Stamp Collectors
The island of Niuafoo is the tip of an active volcano and home to over a thousand Polynesians. Niuafoo residents collect their mail from a monthly steamer whose crew toss letters sealed in tin cans into the shark- infested waters.
The Paradise of the Tasman: A Pacific Island Provides the Palms Which Decorate Hotels, Churches, Steamships, and Homes
With fewer than 150 residents, tiny Lord Howe Island, 360 miles off the east coast of Australia, once served as a whaling station but is now a leading exporter of palms.
The Penn Country in Sussex: Home of Pennsylvania’s Founder Abounds in Quaker History and Memories of Adventurous Smugglers
Little has changed in Sussex County, in southeastern England, since William Penn left his home country in 1682 to found the colony of Pennsylvania.
Penn’s Land of Modern Miracles
The Keystone State, now a major industrial region and producer of steel, coke, and coal, has a history with many lessons, including a fight to protect its diminshed wildlife.

Be the first to review “National Geographic July 1935” Cancel reply 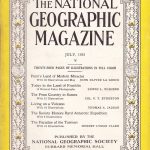