Inside Egypt’s Secret Vaults { Egypt’s Forgotten Treasures}
Egypt’s Forgotten Treasures They’ ve opened the vaults. An exclusive look at Cairo’s Egyptian Museum centennial exhibit includes stunning antiquities on display for the first time ever. BY ZAHI HAWASS PHOTOGRAPHS BY KENNETH GARRETT
Weaving the Future { Dreamweavers}
Dreamweavers The textiles of tomorrow are still on the drawing board. But one day- maybe not so long from now- they could take humans to outer space, make soldiers invisible, keep people in touch with their friends, and move buildings. BY CATHY NEWMAN PH
Strangest Volcano on Earth? { Ol Doinyo Lengai}
Strangest Volcano on Earth? In a remote corner of Tanzania stands an astonishing mountain called 01 Ioinyo Lengai, where lava fountains harden in midair then shatter like glass. BY JOEL K. BOURNE, ] R. PHOTOGRAPHS BY CARSTEN PETER
Japan’s Winter Wildlife { When the Frost Lies White: Japan’s Winter Wildlife}
Japan’s Winter Wildlife A frosted stage gathers red- crowned cranes, whooper swans, sika deer, and snow monkeys. Can Japan turn an ancient reverence for its animals into modern conservation? BY JENNIFER ACKERMAN PHOTOGRAPHS BY TIM LAMAN
45701: One Day, 114 Cameras { Photo Olympics: Athens, OH; ZipUSA: Athens, Ohio}
ZipUSA: Athens, Ohio And they’ re offi From dawn to dusk one cloudy day, 114 photography students at Ohio University head out to document a rural zip, and learn a few things along the way. BY LARRY NIGHSWANDER
China’s Great Wall { Driving the Great Wall; The Great Wall; Chasing the Wall}
The Great Wall Over the centuries the Chinese built not one wall but a vast network of walls to keep foreigners out. Now two foreigners, a writer and a photographer, set off on an unprecedented mission: to follow as much of the walls as they can by car,

Be the first to review “National Geographic January 2003” Cancel reply 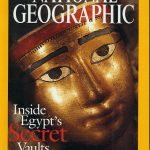