Popocatépetl: Mexico’s Smoking Mountain
In the shadow of an awakened volcano, Mexican government officials prepare to evacuate threatened villages, while residents cling to their land despite occasional eruptions of ash and rock.
Ravens: Legendary Bird Brains
Revered as omens, reviled as destructive pests, these giant black songbirds exhibit an impressive variety of complex behaviors.
Tracking the Anaconda
Researchers engaged in the first ever field study of the world’s largest snake, the green anaconda, investigate breeding balls to learn how the South American serpents reproduce.
Research Committee { Frontiers of Knowledge: A Report By the National Geographic Society’s Committee for Research and Exploration}
From dinosaur embryos to the dance language of bees, the NGS Committee for Research and Exploration enhanced our view of the world with more than 250 grants in 1998.
Lawrence of Arabia: A Hero’s Journey
Leading a personal crusade for Arab independence, this Oxford scholar- turned- warrior altered the course of history and was lionized as the uncrowned King of Arabia.
Coral in Peril
The world’s coral reefs touch our lives in many ways, yet an alarming number of them have been degraded or destroyed.
Coral Eden
Like teeming cities in the sea, coral reefs rival rain forests in diversity of life, and nowhere are they more spectacular than in the tropical western Pacific.
Baffin Island Climb { Baffin Island First Ascent; Hitting the Wall: First Ascent of a Baffin Island Peak}
Climbers inch up 2, 400 feet of sheer stone to the summit of Great Sail Peak on Canada’s ice- glazed Baffin Island.

Be the first to review “National Geographic January 1999” Cancel reply 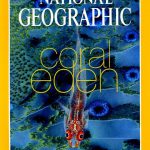