Neandertals { The Dawn of Humans: Neandertals}
Archaeology proves these ancient humans to be intelligent hunters and compassionate beings.
Puffins
Inquisitive and social, these beguiling seabirds are well adapted to the harsh North Atlantic.
Arctic Ocean Traverse { Dispatches From the Arctic Ocean}
An international team completes a perilous transoceanic crossing via the North Pole.
Center of the Earth { Under Our Skin: Hot Theories on the Center of the Earth}
Churning heat at earth’s center drives our dynamic planet and sparks debate among scientists.
The [ Edmund Fitzgerald] { Requiem for the [ Edmund Fitzgerald] }
High- tech dives in Lake Superior retrieve a ship’s bell – – and memories of a lost crew.
Feast of the Tarpon
Clouds of baitfish schooling in the Caribbean attract these voracious predators.
Utah: Land of Promise, Kingdom of Stone
As it celebrates its centennial, Utah still promises wide spaces and family- centered living.

Be the first to review “National Geographic January 1996” Cancel reply 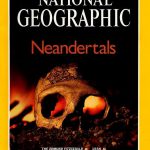