Dzibilchaltun { Lost City of the Maya}
Perhaps as early as 2000 B. C. , members of a great civilization roamed past temples and palaces in this 20- square- mile metropolis in Mexico’s Yucatan.
Dzibilchaltun { Up from the Well of Time}
Divers descend 140 feet into the blackness of a Yucatan sinkhole, where their groping hands pull Maya pots, spears, and human bones from the mud.
The Arctic as a Sea Route of the Future
Nuclear submarines conquer a marine route long blocked by ship- stopping ice and forge a new transocean path between the Pacific and Atlantic.
The Crossing of Antarctica
Making worldwide headlines, a British Commonwealth expedition escapes tractor- gobbling crevasses to complete the first successful trek across the 2, 000- mile continent.
Station Wagon Odyssey: Baghdad to ?stanbul: A Famous American Traveler Continuing a Journey Across the Moslem East Finds New Friends and Changing Nations
William O. Douglas dines with desert royalty as he continues a journey begun last year.
Submarine Through the North Pole
In a voyage straight from Jules Verne, the U. S. Navy’s first nuclear- powered submarine navigates Arctic waters from the Pacific to the Atlantic.
Your Society to Seek New Light on the Cliff Dwellers
Archaeologists set their sights on an undeveloped portion of Colorado’s 600- year- old Mesa Verde ruins, looking for clues to the past.
Little Horses of the Sea
Cavorting in underwater pastures, these surprising, graceful creatures are born of a male parent.

Be the first to review “National Geographic January 1959” Cancel reply 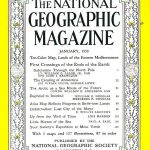