Ships, from Dugouts to Dreadnoughts
As these original etchings by internationally known artist Norman Wilkinson show, the evolution of ships reflects the increasing needs of society as well as its brilliant inventiveness.
Women’s Work in Japan
In factories, tea fields, paddies, and gas stations, the women of Japan share the burden of the country’s work.
Magyar Mirth and Melancholy
From rural Hungary to its capital, Budapest – – composed of two sister cities, Buda and Pest, split by the Danube river – – Hungarians, or Magyars, embrace progress and look to the future yet mourn the loss of several provinces.

Be the first to review “National Geographic January 1938” Cancel reply 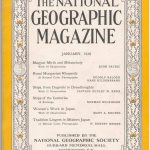