America’s Part in the Allies’ Mastery of the Air
Maj. Joseph Tulasne, chief of the French Aviation Mission to America, relates that the Allies anxiously await the arrival of the American air fleet, which may decide the war in 1918.
Tales of the British Air Service
The premier ace of Great Britain’s Royal Flying Corps, who in three years brought down 47 German aircraft in 110 air battles, describes the heroism of Capt. Albert Ball, who destroyed 43 enemy machines before dying in battle at age 19.
Italy’s Eagles of Combat and Defense: Heroic Achievements of Aviators Above the Adriatic, the Apennines, and the Alps
None of the other Allied nations has faced such a variety of difficulties in the terrain over which its flyers have had to operate, notes the chief of the Italian Military Mission, as he describes the heroic achievement of Italian aviators above the Ad;
Flying in France
In just three years aviation’s role on the battlefield has grown from insignificance to dominance, and airplanes, balloons, and dirigibles now make new tactics of warfare possible.
Aces of the Air
A member of the French Aviation Service describes the glorious duty of the aviator’s calling and the honor of those who have given their lives in the Great War.
Germany’s Air Program
While America and her allies deploy their wealth and resources to launch air fleets into battle, Germany and her vassal nations are equally alert to the importance of air mastery.
The Life Story of an American Airman in France: Extracts from the Letters of Stuart Walcott, Who, Between July and December, 1917, Learned to Fly in French Schools of Aviation, Won Fame at the Front, and Fell Near Saint Souplet
American heroism on the French front is revealed in extracts from the letters of Stuart Walcott, who learned to fly in French aviation schools, won fame in several air battles, and fell near St. Souplet on December 12, 1917.
Building America’s Air Army
Lt. Col. Hiram Bingham describes many of the urgent contingencies America has had to overcome in its rapid buildup and deployment of an Air Army.
The Future of the Airplane
The future of transportation itself will soon be changed by the airplane, which some predict will enable one to travel from London to New York in only two days.
The Italian Race
The Editor, noting that the Italians began fighting the invaders from the North a thousand years before the discovery of America, reminds us of the great gifts to mankind bequeathed by the Italians.

Be the first to review “National Geographic January 1918” Cancel reply 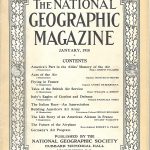