The Millennium Series/ Exploration { Revolutions in Mapping}
Computers and satellites allow today’s mapmakers to chart the heavens, guide a missile, or help a farmer increase crop yield – – with data that can be updated instantly.
Australia By Bike, Part Two: Over the Top
To reach Perth from Darwin, head southwest into the burning wind and pedal, mate – – for 3, 000 miles.
Remember the [ Maine] ? { New Interpretation Throws Open the Question of Cause }
Soon after the U. S. S. Maine exploded and sank in Havana harbor in 1898, questions arose: accident or mine? Despite new information the mystery of the blast remains.
Brides of the Sahara
Festive trappings pattern the day of a Tuareg marriage ceremony in Niger.
The Millennium Series/ Exploration { Jacques- Yves Cousteau; Master of the Deep: Jacques- Yves Cousteau, 1910- 1997}
Co- inventor of the Aqua- Lung, the captain of the Calypso pioneered a new era of underwater exploration and awareness of the threat of pollution to the world’s oceans.
The Millennium Series/ Exploration { Why Explore? }
Pathfinders discuss what it means to be an explorer of earth, sea, and space at the dawn of the 21st century.
The Millennium Series/ Exploration { Queen Maud Land; On the Edge of Antarctica: Queen Maud Land}
On the edge of Antarctica a six- man team climbs mountains never before scaled.

Be the first to review “National Geographic February 1998” Cancel reply 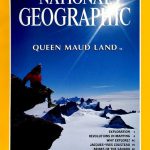