Canada’s Rivers of Conflict { Tatshenshini- Alsek Wilderness Park: Rivers of Conflict}
Named for two raging, glacier- fed rivers, this Canadian wilderness has ridden out a bruising battle over copper mining and emerged intact. The park crowns an international preserve.
Federal Lands
Freewheeling life on the frontier was never free. The West bears the scars of federally subsidized grazing, mining, and logging – – and faces a new land rush of visitors, developers, and retirees.
Connecticut
Built on Yankee ingenuity and industry, the richest state in the U. S. – – in per capita income – – has been hard hit by job losses. Now Connecticut begins to reinvent itself for the post- industrial age.
Return to Hunstein Forest
A daughter of U. S. missionaries revisits her childhood home in Papua New Guinea, where logging may soon destroy pristine rain forest and the way of life of the native Bahinemo people.
Sea Turtles: In a Race for Survival
Hunted for meat, leather, and their shells, sea turtles have suffered great declines in population. All eight species are endangered or threatened, and scientists work to save them from extinction.

Be the first to review “National Geographic February 1994” Cancel reply 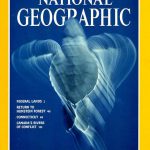