Two American Teachers in China { Two U. S. Teachers in China; Two Years Teaching in China; Letter From Kunming: Two American Teachers in China}
Elizabeth B. Booz and her son Paddy, invited in 1978 to teach English at Yunnan University in Kunming, describe the revitalization of Chinese education since the fall of the Gang of Four.
San Francisco Bay- -Its Beauty and Battles { The Beauty and the Battles of San Francisco Bay}
Nature carved out a great estuary where waters of the Sierra Nevada and the Pacific meet. Cliff Tarpy and James A. Sugar reveal how man’s cities and industries have changed the golden gateway.
Down the Ancient Appian Way
Like the Roman poet Horace, James Cerruti traverses – – and tweaks – – the highway of saints and Caesars. Photographed by O. Louis Mazzatenta.
American Red Cross: A Century Old { The American Red Cross: A Century of Service}
Founded by Clara Barton in 1881, it is now the nation’s largest grass- roots volunteer effort. Louise Levathes and Annie Griffiths show what can be done with nearly 1. 5 million helpers.
Somalia’s Hour of Need { Illustrations text}
War, want, and a massive flood of refugees beset this strategic nation on Africa’s Horn, home of a proud nomadic people. Robert Paul Jordan and Larry Kohl report, with photographs by Michael A. Yamashita and Kevin Fleming.
Saving the Philippine Eagle
Ornithologist Robert S. Kennedy assesses the chances for one of the world’s largest and rarest birds of prey. Photographs by Alan R. Degen, Neil L. Rettig, and Wolfgang A. Salb.

Be the first to review “National Geographic June 1981” Cancel reply 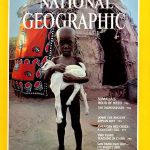