Kathmandu’s Remarkable Newars
The rich and sophisticated culture of Nepal’s capital is largely the product of a talented, enterprising people little known to the outside world. A picture story by John Scofield.
Kangaroos! That Marvelous Mob { Those Kangaroos! They’ re a Marvelous Mob}
Biologist Geoffrey B. Sharman and wildlife photographers Des and Jen Barlett report on the wondrous ways of their country’s most extraordinary creatures, portrayed as well on a special map- supplement with this issue.
Sydney- -Big, Breezy, and Bloomin’ { Sydney: Big, Breezy, and a Bloomin’ Good Show}
A visiting Yank of perceptive ear and eye, Ethel A. Starbird captures the special character – – and characters – – of Australia’s largest metropolis. Photographs by Robert W. Madden.
They Crossed Australia First: The Tragic Burke- Wills Journey { The Tragic Journey of Burke and Wills; The Journey of Burke and Wills: First Across Australia}
Seeking the unknown in 1860, the first men to cross Australia struggled through a vast wasteland to its northern edge, only to die during their return. Joseph Judge and Joseph J. Scherschel retrace an epic in the history of exploration.
Nature’s Whirling Water Purifiers { Rotifers: Nature’s Water Purifiers}
Rotifers, tiny aquatic animals that even under a microscope give an illusion of spinning, help keep the world’s ponds and puddles clean. Photographer John Walsh takes a closeup look.
The Violent Gulf of Alaska { Risk and Reward on Alaska’s Violent Gulf}
For those who can endure wretched weather and rugged lifestyle, the Gulf of Alaska grudgingly yields great riches, Boyd Gibbons and Steve Raymer discover.

Be the first to review “National Geographic February 1979” Cancel reply 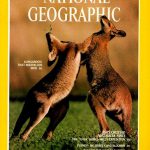